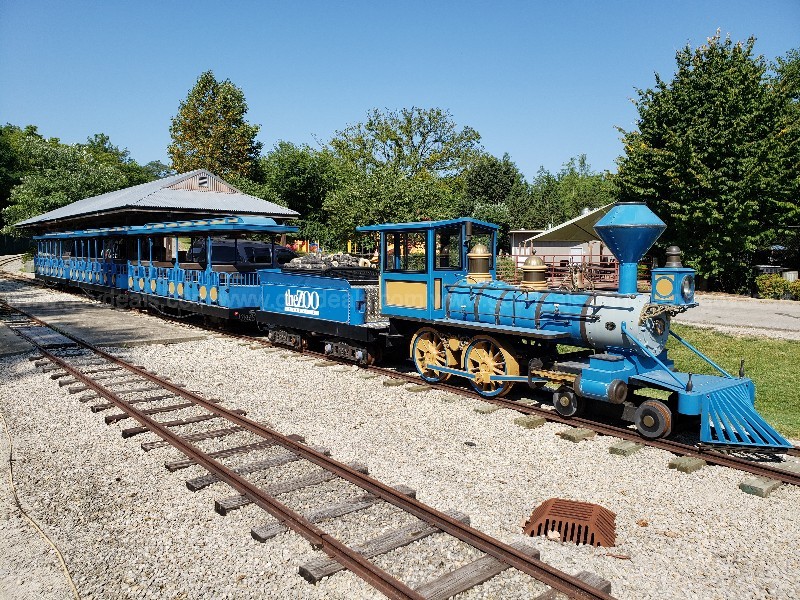 Both trains were manufactured in 2012 by Severn Lamb, a high-quality transport engineering company based in England. Upon completion, they were delivered and installed at the Louisville Zoo in early 2013. The miniature trains were added to an already constructed train station and upcoming tunnels that took guests around the zoo. The trains remained in operation until 2018, when they were retired while still in working condition.

Each train comes equipped with a Kubota KV3600T diesel engine, a tender, and three coaches. They are themed on a North American steam outline design to run on a 2ft track. The locomotives are operated with an engineer at the front and a conductor at the rear and are ADA compliant. Both trains have a coach that is wheelchair accessible. The miniature trains have a microphone connected to the train’s sound system allowing the conductor to connect directly with the passengers.

“We will miss the train at the Zoo,” said Louisville Zoo Director John Walczak. “The trains have been part of many family memories and we know they will continue to make special experiences for guests at their new home.”

The miniature trains are at auction until October 28th and those interested in purchasing the trains are encouraged to schedule an inspection prior to placing any bids. To place a bid, potential buyers must have a bidder account, new bidders can complete the free and easy registration form at GovDeals.com/Register.

About GovDeals and Liquidity Services, Inc.
GovDeals is a marketplace of Liquidity Services. Liquidity Services (NASDAQ: LQDT) operates the world’s largest B2B e-commerce marketplace platform for surplus assets with over $8.5 Billion of completed transactions, approximately 4 million registered buyers and 15,000 corporate and government sellers. We support clients’ sustainability efforts by helping them extend the life of assets, prevent unnecessary waste and carbon emissions, and defer products from landfills. Through our vital mission of Building a Better Future For Surplus we’ve played an integral role in many of our clients’ zero-waste initiatives and worked with corporations, federal and municipal government agencies to pioneer some of the largest green initiatives to date, deferring billions of pounds of surplus assets from landfills.

A photo accompanying this announcement is available at https://www.globenewswire.com/NewsRoom/AttachmentNg/54266dad-56b8-4ac9-b492-c09f4ce42a57

Connect with us on social media.